I finished summer with the now routine visit to Amsterdam, this time following on to Berlin, Prague, Vienna and Munich. With the refugee crisis reaching boiling point first at the border of Hungary and then at Keleti station in Budapest, we thought it prudent to cancel the Budapest leg of the trip in favour of an extended Prague stay. Beer was not the focus of the trip, but needless to say, it featured heavily nonetheless.

As usual, beery things began in De Bierkoning and unfolded in the gorgeous and surprising back garden of my uncle's house near Hoofddorpplein. 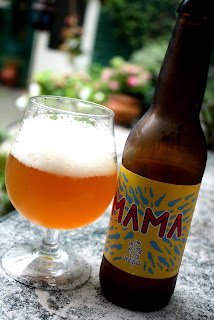 Amsterdam's own Oedipus comes first with Mama, brewed at Brouwerij Anders in Belgium. As a 5% IPA, this should have been very straightforward. Hazy yellow and screaming of lemon is all well and good, with spicy, zesty and yeasty qualities in equal measure inviting you in, but it lies. It lies, because it's just not as fun as it suggested it was going to be. There's a lick of spice, some wet grain and a herbal coriander twist but ultimately way too much wit/tripel cross-breeding for this to be enjoyed as anything like a drinkable IPA. In this way it reminds me of the lesser 't IJ beers, obsessed as they are with that pseudo-Belgian hereditary yeast character. This will probably have its fans, but it hasn't found one in me. 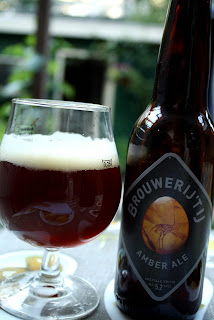 De Prael's IPA is exactly like the Mama, only with added misery in the form of some diacetyl on the nose. Apart from this it is again dominated by yeast and spice and the hopeful hint of grapefruit is less in the US sort of way and more in an old wonky Bock way. As it warms it begs you to find some lemon and orange on the nose but that utterly fails to shout down the butterscotch element that only grows more and more offensive. Ouch.

Much more luck was had with Brouwerij 't IJ's Amber Ale. It is indeed dark amber and immediately announces itself as beautiful. Bittersweet orange and mandarin skins and serious amounts of zesty  pithy grapefruit; this is New World hopping done simply and done well. Clean and dry and certainly the most astringently bitter and juicy of the trio, it scratches an itch that I would find hard to scratch for the rest of the trip. 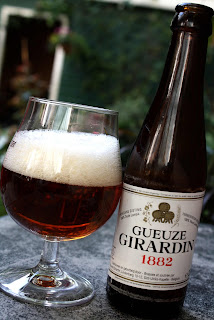 Playing it safe was Gueuze Girardin 1882. Surprisingly dark brown it pours, unsurprisingly woody, cidery and vinous it smells. Waxy bitterness and a not-too-sharp but not-too-round sourness characterises the drink, with some tangy apple cider and almost whiskey-like malt warmth opening up with time. I'm not sure if I'd file this under C for Classic, but I'd give it a lifetime pass to G for Grand. Certainly at around €2 for a tiny 275ml bottle.
A couple of Bierkoning pickups made it out of Amsterdam, but more on those later. 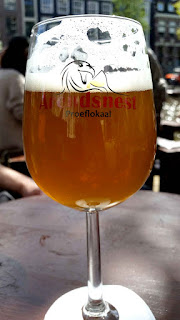 The Arendsnest is still my must-visit bar in the city and on a sunny afternoon it is simply unbeatable. I started with Texels Tripel, a low carbonation, white-capped 9%er. All I could pull from the nose was a bit of generic biscuity grain, but I'll charitably put this down to the serving temperature. Thankfully, there's a lot more going on on the palate; the wheaty heft of the beer is more like a strong blonde at first before the honeyed tripel spiciness kicks in at the finish. It's bitter in a weird, soft kind of way, all coriander and orange skins. For 9% it is a very easygoing sunny day tripel, even if it isn't a world beater.


Keeping things strong is Mommeriete's Vrouwe van Gramsbergh, a 9.5% quadrupel. There's more of a nose to this one, thick as it is with nutty toffee chocolate, brown sugar and cola. To taste it's a rich and semi-sweet dark fruit bomb, dominated by delicious raisiny malt and chewy tobacco and fig. There's even more chocolate here to sign off, and the whole thing plays like a highly enjoyable if predictable quad. And there's nothing wrong with that.

The last beer of this short, sweet session was Emelisse's Black and Tan, this version aged in Wild Turkey barrels. It looks, well, black and tan, while the aroma has a holy shit amount of coffee. There may be some typical barrel-ageing fare like woody vanilla, but mostly it is chocolate covered liquorice bliss. The palate gets dollops of sticky black fruit jam and bitter dark chocolate, washed down with strong, cold black coffee and a flash of boozy heat. And all in the space of a 10.2% tasting glass. Hats off Emelisse.

The San Marino of the gathering presented itself during the Sober Destrier's mandatory trip to the excellent Apenheul primate park in Apeldoorn, where the restaurant was serving Gulpener Ur-Pilsner. It's actually a decent pils, if a little short on pilsy hopping, offering instead just plenty of clean, straw-like malt refreshment. Serviceable, but here appearing, quite literally, as an afterthought.