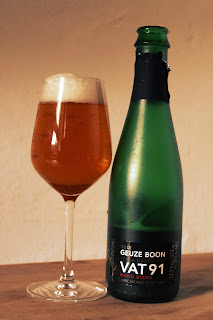 This intriguing set of four single vat Boon gueuze monoblends is still knocking around, aiming to showcase the influence of a variety of casks on Boon's geuze-bound lambic. I had mine for about a year before remembering to demolish the whole set over a single (albeit lengthy) session one Sunday before the seat fell out of the pants of the world.

First is Vat 91, a calvados vessel bottled (like all the rest) in December 2016, making this around two and a half years old at the time of drinking. Compared to the likes of Mariage Parfait or the superb Black Label it seems rather rich and mouthfilling, if not particularly acidic. There's a lemon sorbet almost-sweetness with a gentle sour edge, and a complex foundation of musty age and wet grain. It's pretty much a Boon geuze straight up, all balance and rustic satisfaction. I like it, and, SPOILER, it becomes my favourite of the quartet. 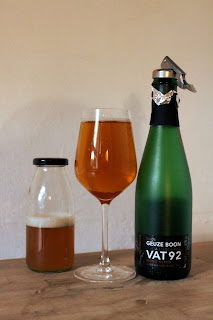 I like to picture Vat 92 occupying the space directly next to this in the presumably extensive Boon wood storage spaces, even though this wood started life cuddling red wine in the Rhone valley. As in Vat 91 (and indeed the rest of the set), there is no actual taste of the cask's previous occupant transferred to the beer, but what it does give is seemingly less than the calvados; it's drier and less 'rich', lacking some of the fullsome wheat base of the others. More of an issue is the tiny shade of cardboard lurking in the background, but for all that Vat 92 is not a bad geuze, just not particularly great. 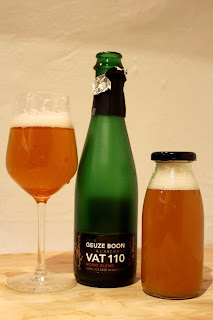 Vat 108 ratchets up the acidity, making it the most sour of the bunch but also the flattest. Beyond acid there's a pungency of old wood and a coppery, blood-like sharpness. Even aside from these flavour elements, the lack of carbonation and aggressive sourness makes it the least 'complete' and drinkable geuze of the sitting. The vat in question is a dyed-in-the-wool lambic vessel from c. 1935, accounting for the higher acidity and aged character.

Last up is Vat 110, an old cognac vessel, though if you had told me this was aged in virgin oak, I  would have believed you; it has a subtle but present fresh wood-shaving and vanilla sweetness, in an otherwise tame and muted geuze.

Needless to say, I made 1:1:1:1 polyblend of these monoblends, and it was surprisingly delicious, though still not as balanced and well-rounded as the Vat 91. If these bottles were roaming the wild loose of the set, I would pick up Vat 91 before the others, though the real value of the box is in experimenting and blending.